In Hollywood, they say it’s all about who you know. And yet, this is not the easiest city in which to make connections.

When we have events on the studio lot, we go out of our way to connect attendees with one another and their inner star. And yes, sometimes that means we use cinematic tricks. In the past, guests were happy to simply have an event on a working lot. Today, the trend is to bring them even closer to the action through the use of actual movie props, cinematic technology and even completely scripted events and weddings.

It’s all about making that Hollywood connection come to life and we are able to do that by offering various venue ideas.

Connecting to the Dream

We love it when a planner comes to the studio with a unique venue ideas for an event. This particular event was a wedding and the producer was Kristin Banta Events. Her clients, Stefania and Derek, wanted a wedding inspired by Bruce Wayne and his alter ego, Batman. Warner Bros. was the perfect choice. After a ceremony in the Jack Warner Rose Garden, the bride and groom pulled up to the reception on Brownstone Street in a vintage 1966 Batmobile. Talk about living the dream!

Cameo roles, also called walk-ons, take on a new meaning at Stage 48: From Script to Screen. Green screen technology means that visitors can ride on or fly into an iconic Batman or Harry Potter scene. Open to anyone, Stage 48 can be specially rented for an event. In addition to the green screen room, they can do a scene direct from Central Perk, the café from Friends, and learn more about sound, costume production and cinematic techniques such as perspective, sound and lighting.

No matter what the event today, technology is finding a way to make a connection with guests. Robots, like Pepper from Softbank, have become extremely cognitive and able to interact in a way that they have never done before. Pepper had the world of Warner Bros.’ new shows at his cyber fingertips. He was able to show guests trailers of any films they wanted to see, to take selfies with them using different screen shots on its computer screen interface, and even entertain itself by dancing the Locomotion when not being engaged by guests. 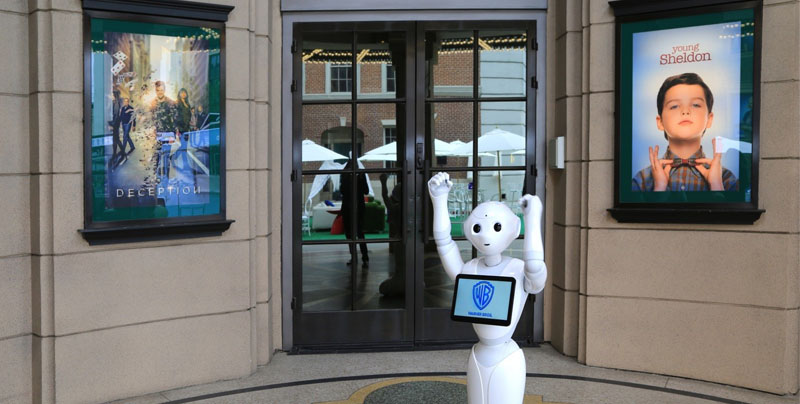 Just as we find ourselves drawn to technology in Hollywood, the opposite trend is just as true. There is no better way to make a connection than with an intimate dinner party. We are seeing that more and more on the lot – small dinner parties or cocktail parties that can be followed by, or begin with a private screening of a classic or current WB film. The event pictured here was old Hollywood perfection down to the film reel base plates and gold flatware.

As we said before, Hollywood is all about connections and to that end, we are happy to be connected with Allseated. Their programs enable us to create and share floorplans for our venue ideas with our team members so that each event is setup according to our vision.

Warner Bros. Special Events is a full-service event department that can either provide all aspects of an event in-house, but we are also happy and able to work with independent planners, designers and other creative partners who would like to book events at Warner Bros. www.wbspecialevents.com

Showcase your venue in Allseated's life-like, immersive, virtual reality technology which truly brings your property to life. Our VR uses 360 diagramming and is a genuine virtual reality tool that is able to bring venues the biggest ROI in the history of event technology!

The first to be seen in our industry for professionals.
Give your clients a gift they will never forget! Allseated now offers the experience of creating a Virtual Reality (VR) “look around” of a 3D designed floorplan. The VR offer will include a pair of goggles that hold a mobile phone so that you can view your floorplans anywhere and anytime. Download the Allseated mobile app now: iOS or Android.

Allseated's 3D Designer Tool is a Scaled Table & Buffet Builder. It shows you exactly what can fit on a tabletop, so there is no more guesswork around how the tabletop layout will look on the day of your event. Choose from a library of items including tableware, silverware, glassware, buffet pieces, center pieces, and linens.